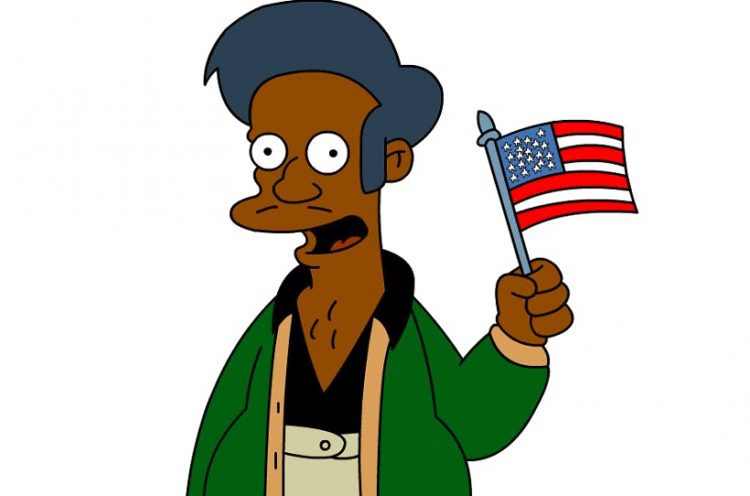 Hank Azaria, the actor who voices Kwik-E-Mart owner Apu Nahasapeemapetilon on The Simpsons, says he would be happy to retire the character after complaints that Apu stereotypes people of Indian descent.

Speaking to Stephen Colbert on The Late Show on CBS, Azaria said he was upset to learn of the pain and distress the character caused.

“The idea that anybody, young or old, past or present, was bullied or teased based on the character of Apu, it just really makes me said,” he told Colbert.

“I wanted to spread laughter and joy with this character and the idea that it has brought pain and suffering in any way, it’s upsetting.”

When The Simpsons was first broadcast 30 years ago, the character of Apu was considered groundbreaking as the first south-Asian character to regularly appear on a television show in the US.

He was used cleverly by the writers to highlight issues of ignorance and xenophobia.

The Problem of Apu

But as the years went on, and new episodes of The Simpsons kept being produced, more and more people became uncomfortable with the character and how it portrayed people of south-Asian descent.

The criticism was highlighted in 2017 in a documentary made by comedian Hari Kondabolu called ‘The Problem With Apu’.

Kondabolu was critical that the character was a stereotype – working in a convenience store with questionable business practices.

He also pointed out that Apu’s thick Indian accent was performed by Azaria, who is white.

“It’s a very stereotypical form of representation.  There’s nothing wrong with being a convenience store owner but it’s an inauthentic voice,” Kondabolu said.

“This character was written through the lens of white writers to reflect of what they saw of our community.”

In response to the criticism, The Simpsons creators wrote a scene featuring Marge and Lisa.

Lisa says: “Something that started decades ago and was applauded and inoffensive is now politically incorrect.  What can you do?”

A photo of Apu appears and Marge responds: “Some things will be dealt with at a later date” with Lisa adding, “if it all.”

The program then cuts to a photo of Apu with the inscription: “Don’t have a cow” – a popular phrase used by the character of Bart Simpson.

The scene was widely criticised as lazy writing and cringe-worthy.

The Simpsons respond to the problem of Apu

Azaria said he had nothing to do with the scene, and told Stephen Colbert that he wanted to see more Indian writers contributing to the show.

“I really want to see Indian, south-Asian, writers in the writers room – not in a token way – but genuinely informing whatever new direction this character may take, including how it is voiced or not voiced,” Azaria said.

“You know, I am perfectly willing and happy to step aside, or help transition it into something new, I really hope that’s what the Simpsons does, it not only makes sense, but it feels like the right thing to do to me.”

Hank Azaria Prepared To Retire Apu From The Simpsons

If you have experienced discrimination based on your race or ethnic origin, you may be entitled to compensation.

‘The time for transphobia is over’ – Humphries dropped from festival award

After making a number of offensive comments about transgender people, the Melbourne International Comedy Festival…